If there's one thing that most traders are always looking for, is a set of rules or a system that allows them to trade the markets profitably. In this article I will describe a complete trading system used, in the past, by a very famous trader and the people he taught, and then later on by several hedge funds managed by his disciples.

It can be used "as is", without any modifications, or you can use it as a basis to develop your own system, further enhancing the power of the original rules.
______________

In the early-1980s, one of the greatest and richest traders of the 20th century, Richard Dennis, and his friend Bill Eckhardt, were having an ongoing discussion on the viability of teaching people how to trade. Richard was convinced that it was possible to teach ordinary people to become good traders, while Bill believed that great traders possessed a natural skill, some sort of sixth sense that could not be taught.

In order to settle this discussion they made a bet: they would recruit a few inexperienced people for their trading company, C & D Commodities, teach them the rules of the system they already used, give them capital to trade, and then see if they had become good traders or not. 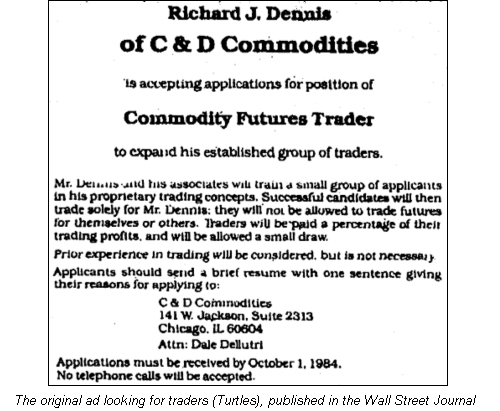 Richard and Bill did not believe that the future direction of the markets could be predicted consistently in the long run, so it was futile to even attempt it. Their whole approach to trading was based on following the market's momentum after a breakout. The idea behind it is that once the market breaches a resistance/support (previous high/low), it is likely to continue in the same direction.

Losing trades are quickly closed once the stop-loss is hit, while winning trades are kept open until the trend reverses, no take profit orders are used.

► Ingredients of the system

Even though the original system used daily bars, you can use any time-frame you wish. However, the shorter the time-frame the lower the profit factor of any system will be, due to trading costs remaining constant and profit potential getting lower. A good technical system should be time-frame neutral, so if you see a system which requires a very specific time-frame to work, be cautious.

Recommended pairs
Like the time-frame, a good system should work on all markets, as long as their are liquid, and the costs are low. The Turtles traded currencies, bonds, and commodities with this system. I advise trading as many currency pairs at the same time as possible (scaling back the amounts accordingly), because diversification, when done correctly, is the best way to lower risk while keeping the profit potential intact.
► Finally the rules

Open a long or short position if the price exceeds the high or the low price respectively of the past 20 periods (Donchian Channel 20). 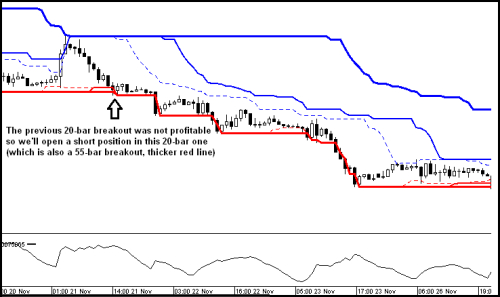 If a 20-bar breakout is ignored, you are at the risk of missing a big trend, if the price continues to move in the direction of the breakout, so this is where System 2 is useful. If the price exceeds the 55-bar high/low you open a long/short position respectively, in case you didn't open a trade at the 20-bar breakout. All 55-bar breakouts are taken, whether or not the previous one was a winner.

Exits
The system uses manual trailing stops, so a System 1 trade would be closed if the price moved against the position and exceeded the 10-bar low/high. 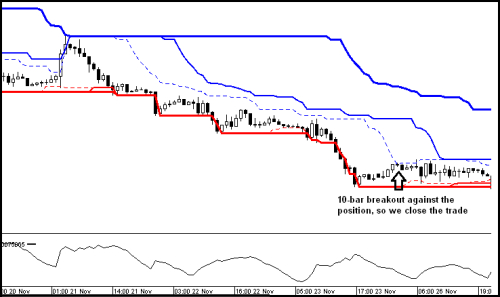 System 2 trades would be closed if the price went against the position and exceeded the 20-bar low/high.